One of the many areas of this field that I really enjoy is the “cat and mouse” game played between RedTeam and BlueTeam, each forcing the other to up their game. Often we see some awesome tools being released to help defenders detect malware or shellcode execution, and knowing just how these defensive capabilities function is important when performing a successful pentest or RedTeam engagement.

Recently I came across the awesome post “Defenders Think in Graphs Too!”, which can be found over on the SpectreOps blog here. This post is the start of a series looking at “data acquisition, data quality, and data analysis through a case study focused on detecting Process Injection”. If you haven’t read it, I highly recommend that you do.

One of the tools discussed in the post is “Get-InjectedThread”, a Powershell script capable of enumerating running processes and displaying information on any that it believes have been victim to process injection. The tool can be found over on GitHub here.

One thing I thought of when I saw this tool, was just how I would go about bypassing detection if I encountered it during an engagement. Also, with an interest in this area of Windows security, I really wanted a good starting point to build on when this detection technique evolves, either through the next iteration of Get-InjectedThread, or through other tools intergrating the same method. This post will go through a few different techniques to help us understand just how we could bypass this kind of analysis.

Can we avoid detection?

Typically, when attempting to execute code in another process, the VirtualAllocEx -> WriteProcessMemory -> CreateRemoteThread chain is used. Let’s take a quick look at Get-InjectedThread in action, by first injecting shellcode into a process, and then running Get-InjectedThread: 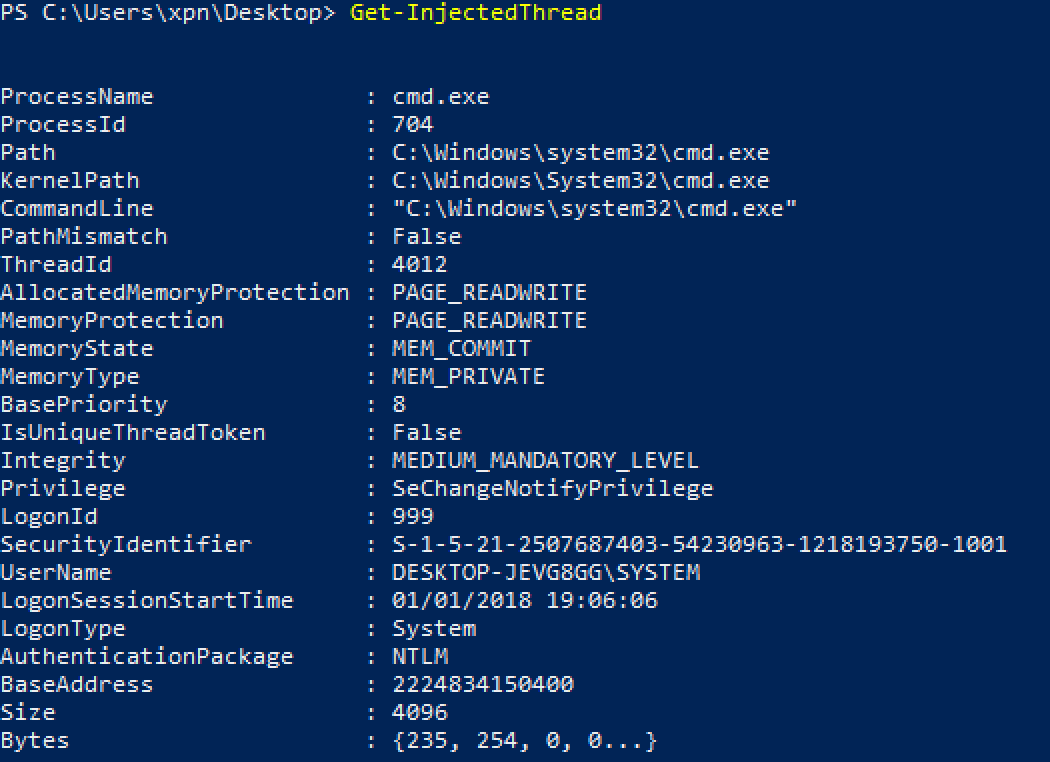 … I did say Get-InjectedThread was awesome didn’t I :).

Here we see that shellcode injected into cmd.exe is caught and displayed to the user, giving an indication that something is suspicious.

The way that Get-InjectedThread achieves this is by analysing running threads on a system. The memory associated with the start address of the thread is then enumerated, and if the memory is found to be missing the MEM_IMAGE flag, the tool indicates that the thread is likely running from dynamically allocated memory (most likely from a VirtualAllocEx call or similar), rather than being spawned from a DLL or EXE… pretty cool.

Now, let’s review the code to see just how these checks are performed:

Reading the above, there are a number of areas that stand out. The first is:

This command is responsible for retrieving the entry address of the running thread. When injecting shellcode, this would typically be the address provided to the CreateRemoteThread call. For example:

The second interesting call is:

This line is making a call to the Win32 function VirtualQueryEx, which returns information on the memory allocation associated with the running thread’s base address. Information such as memory protection, length, flags etc..

This information is then used in the following command:

Here we see a final check to see if the thread’s base address has the MEM_COMMIT flag and is missing the MEM_IMAGE flag. If this is true, it is highly likely that this is a thread injected and running from dynamic memory, which the tool then highlights.

With this in mind, let’s see if there are any methods in which we can bypass these checks, and stay under the radar during an assessment.

The first way we will attempt to avoid being caught, is by adding our shellcode to a DLL, and then using LoadLibraryA as our entrypoint. By doing this we can bypass the following check, as our entry point is actually within MEM_IMAGE flagged memory:

To target LoadLibraryA, we will need to complete the following steps:

Let’s give this a shot by making a call to MessageBoxA from our injected DLL: 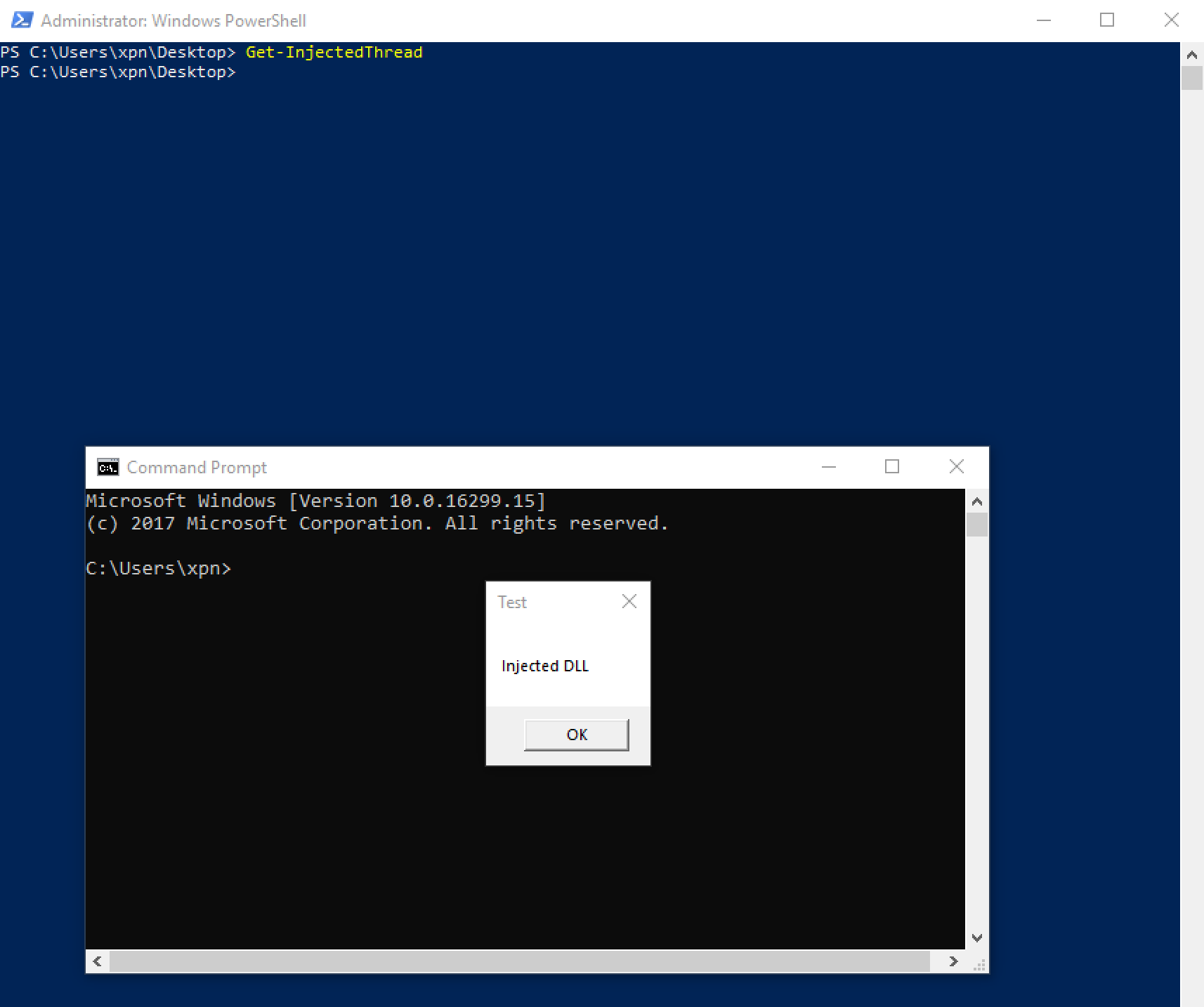 Here we see that we have successfully injected our shellcode into cmd.exe, which launches the message box. More so, we are not picked up during Get-InjectedThread‘s run.

There is of course an obvious weakness to this technique, in that we need to drop a DLL onto disk to perform injection, increasing our shellcode’s chances of being discovered… however it’s a good starting point.

Let’s see if we can do anything else.

We now know that a good way to stay under the radar is to have our thread’s entry address set to a memory region containing the MEM_IMAGE flag. But what about if we update the entrypoint of our thread just before starting, would this be enough to evade detection?

In this example, we will look to leverage the SetThreadContext call to redirect execution to our injected shellcode, using the following steps:

The theory here is that our thread’s base address will be that of a MEM_IMAGE flagged memory region, even though we never actually execute code from this address. Then by setting the rip register to point to our shellcode, we achieve execution whilst hopefully bypassing Get-InjectedThread. Our code will look like this:

Running our example, we see that we have our second method of executing shellcode, injecting our thread into notepad.exe: 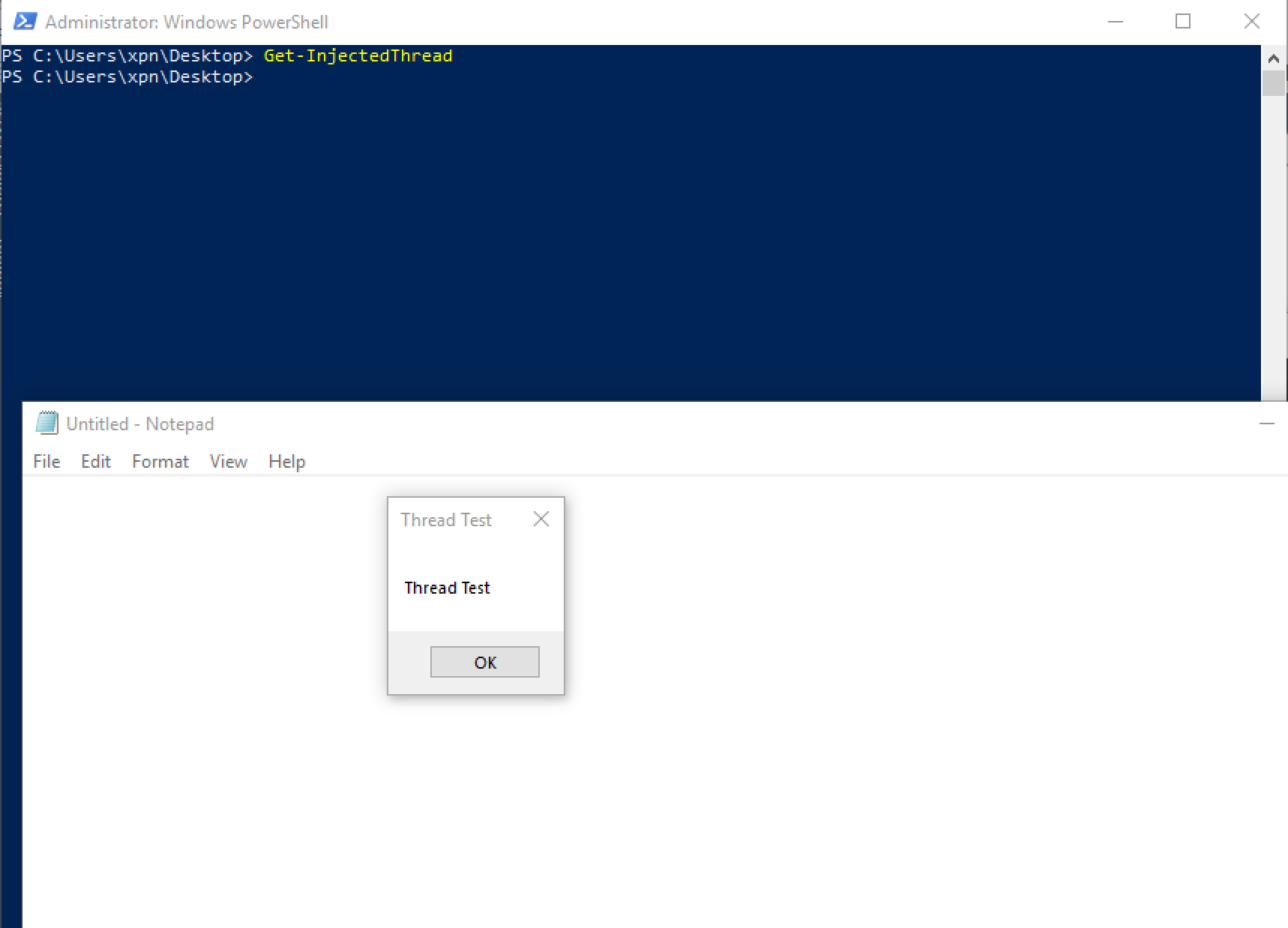 OK, so this one is a bit out of left field… In this example, we will leverage the instructions of an existing MEM_IMAGE binary to pass execution to our shellcode (think ROP), so we:

On x64 processes, the argument will be passed in the rcx register, so how about we hunt for a gadget of:

This way, we can set our ThreadProc address to the jmp rcx gadget, and pass our shellcode address as the argument. Again this meets the requirement of ensuring that our thread’s base address being within a MEM_IMAGE section of memory, so should help avoid detection.

Below is an example of how to achieve this:

And when executed, we find that our shellcode can run without being flagged: 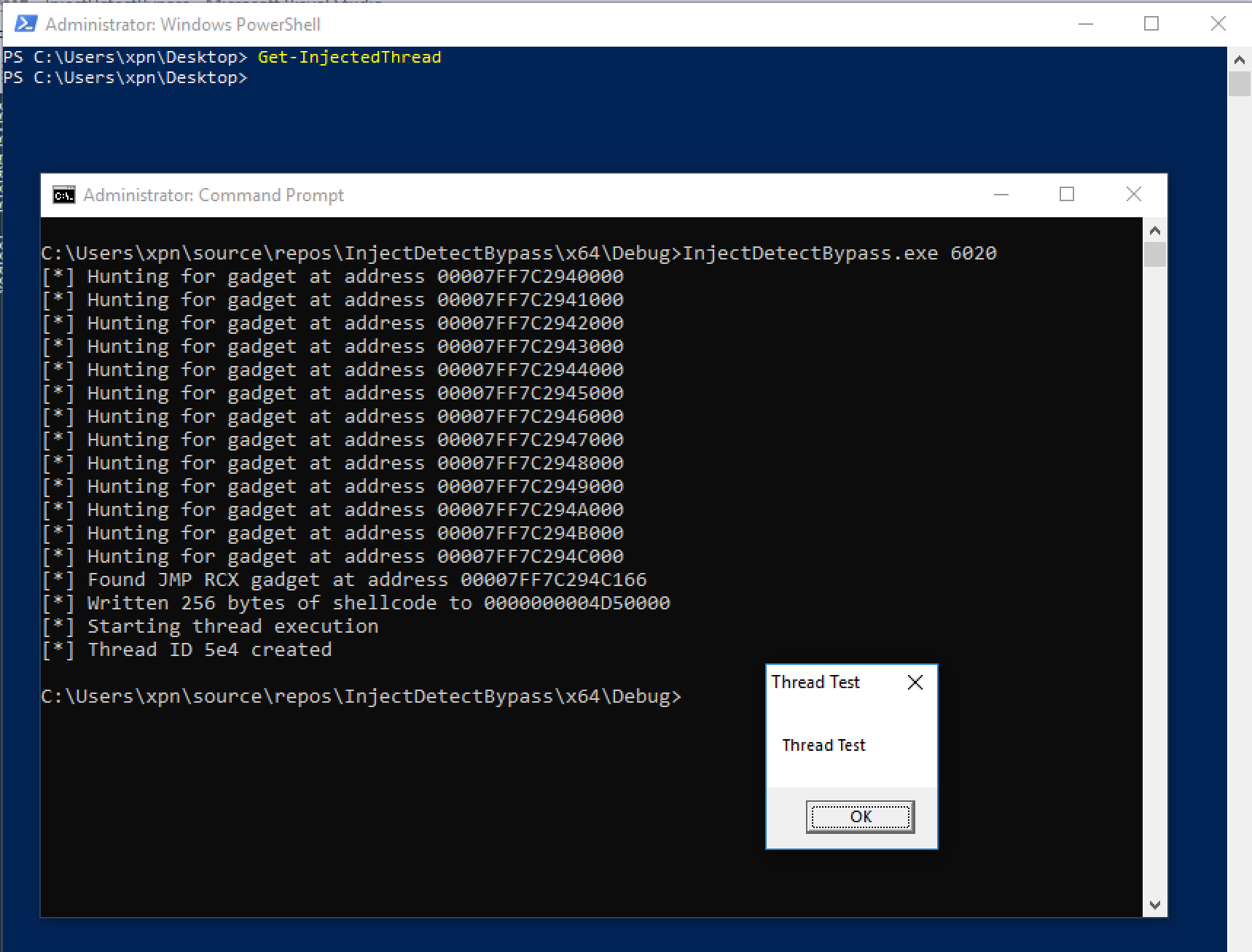 So there we have it, a few different methods of spawning our thread whilst obscuring the true start address. Hopefully this proves to be useful if you ever come across a similar detection technique. If you have any methods in which the above examples can be detected using Get-InjectedThreads, it would be awesome to hear them!