Back in March, a vulnerability was disclosed by Ulf Frisk in Windows 7 and Server 2008 R2.

The vulnerability is pretty awesome, a patch released by Microsoft to mitigate the Meltdown vulnerability inadvertently opened up a hole on versions of Windows, allowing any process to access and modify page table entries.

The writeup of the vulnerability can be found over on Ulf’s blog here, and is well worth a read.

This week I had some free time, so I decided to dig into the vulnerability and see just how the issue manifested itself. The aim was to create a quick exploit which could be used to elevate privileges during an assessment. I ended up delving into Windows memory management more than I had before, so this post was created to walk through just how an exploit can be crafted for this kind of vulnerability.

As always, this post is for people looking to learn about exploitation techniques rather than simply providing a ready to fire exploit. With that said, let’s start with some paging fundamentals.

To understand the workings of this vulnerability, we first need cover some of the fundamentals of how paging works on the x86/x64 architecture.

As we all know, a virtual address on a x64 OS usually looks something like:

Unbeknown to some however, the virtual address is not just a pointer to an arbitrary location in RAM… it actually made up of a number of fields which have a specific purpose when translating virtual addresses to physical addresses.

Let’s start by converting the above virtual memory address into binary:

Working left to right, we first disregard the first 16 bits as these bits are actually meaningless to us (they are simply set to mirror the 48th bit of a virtual address).

Starting at an offset of 48 bits:

Of course, the next question to ask is… just what are PML4, PDPT, PD, and PT!!

In x64 architecture, translating virtual addresses to physical addresses is done using a set of paging tables, pointed to by the CR3 register:

Each table is responsible for providing both a physical addresses of where our data is stored, and flags associated with this memory location.

For example, an entry in a page table can be responsible for providing a pointer to the next table in the lookup chain, for setting the NX bit on a page of memory, or to ensure that kernel memory is not accessible to applications running on the OS.

Simplified, the above virtual address lookup would flow through the tables like this: 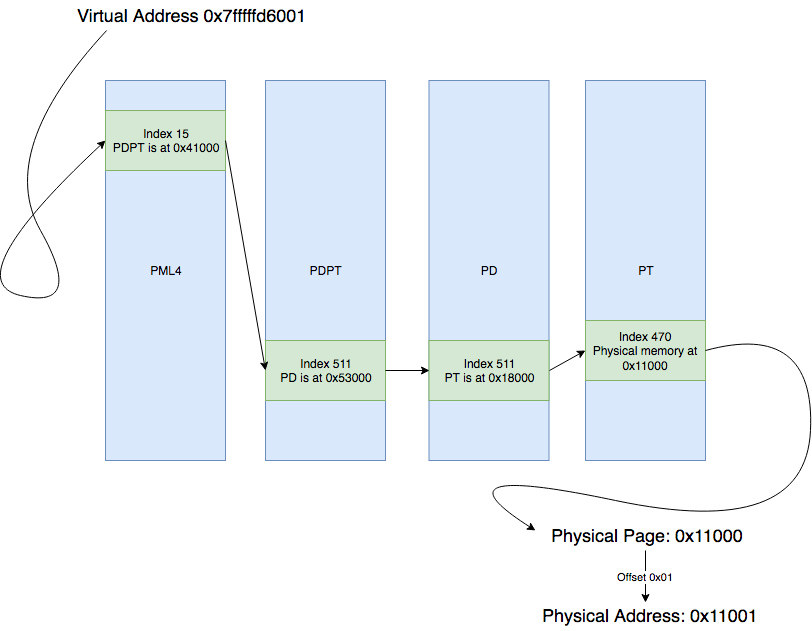 Here we see that the process of traversing these tables is completed by each entry providing a pointer to the next table, with the final entry ultimately pointing to a physical address in memory where data is stored.

As you can imagine, storing and managing page tables for each process on an OS can take a lot of effort. One trick used by OS developers to ease this process is a technique called “Self-Referencing Page Tables”.

So why would anyone do this? Well, this actually gives us a set of virtual addresses where we can reference and modify any of the page tables in our virtual address space.

For example, if we want to modify the PML4 table for our process, we can simply reference the virtual address 0x804020100000, which translates to:

Which ultimately returns the memory of… PML4.

Hopefully this gives you an idea as to the power of this recursive nature of self-referencing page tables.. believe me it took a few evenings staring at the screen to get my head around that :D

Using the below code as a further example, we can see that a virtual address of ffff804020100000 allows us to retrieve the PML4 table for editing, where index 0x100 of PML4 is a self-reference.

You can run this code in a browser to see the results: https://play.golang.org/p/tyQUoox47ri

For example, given a PML4 index of 0x150, and our self-referencing entry in 0x100, we can return the corresponding PDPT table with the address 0xffff804020150000. Again our golang application can help to illustrate just how this is the case: https://play.golang.org/p/f02hYYFgmWo.

OK, so now we understand the fundamentals, we can move on to the vulnerability.

On my vulnerable lab instance, PML4’s entry 0x1ed appears similar to this:

Here we have a number of flags, however what we should pay attention to is the 3rd bit of this page table entry. Bit 3, if set, allows access to the page of memory from user-mode, rather than access being restricted to the kernel… :O

Worse, PML4 entry 0x1ed is used as the Self-Referencing Entry in Windows 7 and Server 2008 R2 x64, meaning that any user-mode process is granted access to view and modify the PML4 page table.

And as we now know, by modifying this top level page table, we actually have the ability to view modify all physical memory on the system… \_(ö)_/

So how do we go about exploiting this? Well to leverage the flaw and achieve privilege escalation, we will use a number of steps to our exploit:

Before we begin, I should mention that none of this post would have been possible without PCILeech’s code found here. Being the first time I’ve really dug into OS paging at this level before, the exploit code used by devicetmd.c had me awake for a few nights trying to wrap my head around just how it worked, so huge kudo’s to Ulf Frisk for finding the vulnerability and PCILeech!

Rather than simply reimplementing Ulf’s paging technique, we will use the PCILeech code to set up our page table. To make things a bit easier to follow, I’ve updated a few of the magic numbers and added comments to explain just what is happening:

Now we have our page table set up, we need to hunt for _EPROCESS structures in physical memory. Let’s take a look at how our _EPROCESS object looks in kernel memory:

To create a simple signature, we can use the fields ImageFileName, and PriorityClass, which we will use to scan through memory until we get a hit. This appeared to work in my lab, however if you find that you are getting false positives, you can be as granular as you like:

Finally, as with most kernel privilege escalation exploits (see my previous tutorials here, here and here), we need to replace our _EPROCESS.Token field with that of the System process token:

And as we can see in the below demo, we now have a nice way to elevate privileges on Windows 7 x64:

The final code can also be found over on Github here.

Edit: A new version of the code, which implements some memory checking, can now also be found on Github here.

The fix, and improvements

To ensure that your system is mitigated against this exploit, Microsoft have released a patch for CVE-2018-1038 here which can be deployed to remediate this issue.

Now for anyone who has ever done any low-level development in the past, you may have noticed that the above exploit code does not include further checks for device mapped memory when seeking for _EPROCESS objects. During my lab tests this didn’t show as an issue, however when encountering differing hardware and environments, additional checks should be added to ensure BSOD risks are reduced. If you feel like tackling this, please sent me your implementation and I’d be happy to update the exploit / post.

Edit: To try and reduce the chance of BSOD, I’ve implemented some additional memory checks with a second version of the POC which can be found on Github here.