g_CiOptions in a Virtualized World

With the leaking of code signing certificates and exploits for vulnerable drivers becoming common occurrences, adversaries are adopting the kernel as their new playground. And with Microsoft making technologies like Virtualization Based Security (VBS) and Hypervisor Code Integrity (HVCI) available, I wanted to take some time to understand just how vulnerable endpoints are when faced with an attacker set on escaping to Ring-0.

In this post we will look at a common technique used to disable driver signing enforcement, how VBS has attempted to stop attackers from exploiting this, and how when not partnered with HVCI, just how easy it is to bypass this security control.

For a while now, Windows has used Driver Signature Enforcement (DSE) to prevent attackers from loading unsigned drivers into the kernel. This has been a mostly effective way of ensuring that an attacker doesn’t have the ability to easily bypass many of the security features implemented in the kernel such as Process Protection Light (PPL) by messing with EPROCESS fields.

To work around this, attackers have had a few options available. The first has been to ship a vulnerable driver over to the target which meets all of the signing requirements to be loaded, but allows the attacker to exploit its flaws to make memory modifications required to load further unsigned drivers into the kernel. The second method has been to leverage previously exposed signing certificates which allows attackers to sign their own driver code to be loaded directly into the kernel. And with recent breaches such as the LAPSUS$ NVidia leak, this technique has become more a more obvious route for attackers.

So what if we want to go about disabling Driver Signature Enforcement without resorting to rebooting the OS into debug or test mode? Well in the latest versions of Windows, DSE is enforced via a module called CI.dll, in which a configuration variable of g_CiOptions is exposed:

This configuration variable has a number of flags that can be set, but typically for bypassing DSE this value is set to 0, completely disabled DSE and allows the attacker to load unsigned drivers just fine.

For a long time this worked flawlessly and allowed an easy way to side-load unsigned drivers into the OS. But then VBS in Windows 10 came to spoil the party.

Fast forward to today: Microsoft have made significant efforts to protect the kernel from tampering. A brilliant talk summarising the reason for these efforts, chief amongst which is the shifting laws of security, was given by David Weston at Bluehat in 2018. Laws such as “If a bad guy can persuade you to run his program on your computer, it’s not your computer anymore“ no longer holds true, and Microsoft have spent time locking down their OS to reflect this.

One of the technologies deployed by Microsoft to harden the kernel from attack is called “Virtualization Based Security”. This comes enabled by default on Windows 10 and 11 and provides a hypervisor protected environment running a second “secure kernel” which cannot be touched by the traditional kernel running in Ring-0.

Note: At this stage that there is some confusion between VBS and HVCI. VBS isn’t HVCI. The mistake is easily made by defenders because there is so much content out there conflating the two technologies. HVCI can be seen as operating under the VBS umbrella but requires separate configuration to be enabled.

So how does VBS protect against disabling driver signature enforcement with a leaked certificate or vulnerable driver? Well let’s take a look at how the g_CiOptions variable is parsed in CI.dll:

Here we can see the use of MmProtectDriverSection, which is an API made available as part of a technology called Kernel Data Protection or KDP (Another acronym that sits under the VBS umbrella). This API ensures that when passed a memory address, code running in Ring-0 is incapable of modifying its contents.

Even if we try to use something like WinDBG attached to the kernel (with DSE enabled by setting DebugFlags to 0x10), we still can’t update the value stored:

This means we are going to have to hunt for another way to disable DSE when VBS has been enabled.

If you’ve followed many of the AMSI bypass techniques in the past, you’ll likely be familiar with what we can do here to bypass this protection… we patch. First we need to understand where we need to patch, so let’s head into the kernel debugger session and add a breakpoint to a location where we know where the policy may be reviewed. CiCheckPolicyBits looks like a good function to break on, based on a review of CI.dll. Starting there, attempting to load an unsigned driver results in a call stack that looks like this: 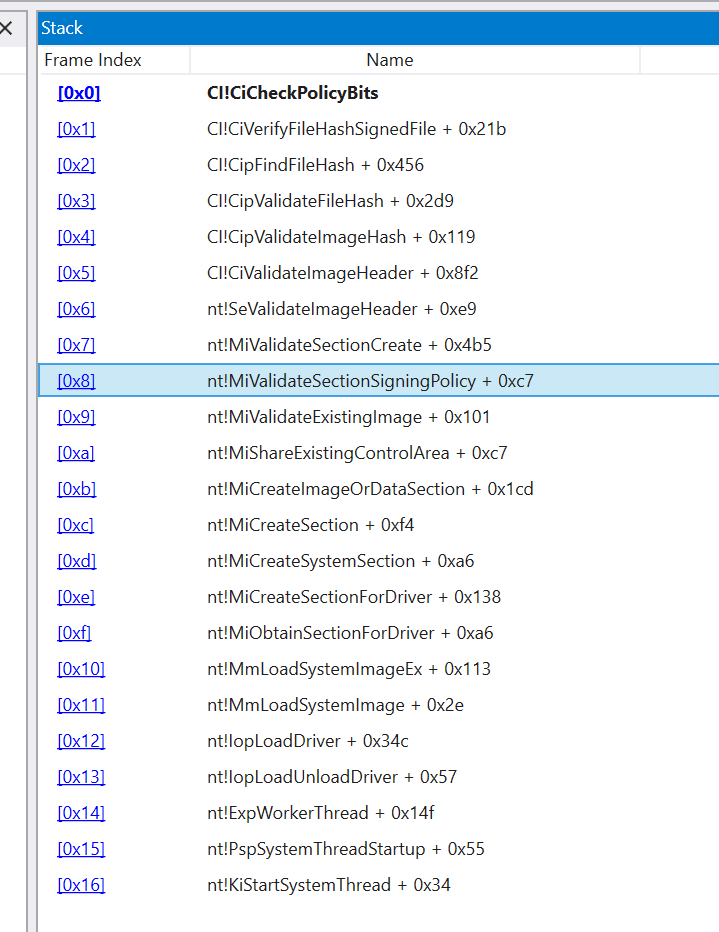 Looks like a NTSTATUS code to me. Searching in the Magic Number Database shows that c0000428 corresponds to STATUS_INVALID_IMAGE_HASH. So we can make a pretty good guess here that if this function returns STATUS_SUCCESS, we are going to bypass this signing check. Fortunately for us, we also know that this method isn’t protected by Kernel Data Protection, so now we just need to figure out a way to allow writing to this memory location.

Disabling DSE with a Signed Driver

Let’s craft a quick driver which will make things a bit easier to conceptualize when disabling DSE. Obviously this is going to have to be signed with a certificate once built to be loaded. For reasons that will become obvious in the next section, we’ll focus on stubbing out CiValidateImageHeader via read/write, but feel free to get creative with your solution. There are obviously plenty of places to hijack!

We start by modifying memory protection for CiValidateImageHeader in the kernel. The most straightforward way of doing this is by directly modifying page table entries (PTE) for virtual addresses. To grab the page table entry for CiValidateImageHeader, we will first need to find a method which allows us to translate a virtual address to its corresponding PTE.

For anyone who hangs out in the game cheat scene, you’ll know that the function that we use in this case is MiGetPteAddress. For a brilliant explanation on hunting this method down, check out @33y0re‘s awesome blog post on PTE overwrites . Essentially, this function reveals the PTE base address that we need for later, which we can see below as 0FFFFCE8000000000 but updates on every reboot:

To find this function we’re going to need to hunt through memory for a byte signature. We can do this with something like:

By searching through memory for our signature matching MiGetPteAddress, we can extract the PTE base and resolve virtual addresses to PTE locations:

Now we have the ability to resolve PTE’s for a virtual address, we need to find the virtual address of CiValidateImageHeader. As this function isn’t exported by CI.dll, we’re again going to have to hunt for it by signature:

Once we have its address, we can get the PTE location for a virtual address. We just need to flip a bit in the corresponding PTE value forcing the page of memory containing CiValidateImageHeader to be writable:

With the page set to writable, we can next just patch the beginning of the function with a xor rax, rax; ret, making sure we take a backup of the original instructions for restoring later:

And then return page protection for sanity:

Once executed, let’s try and load our unsigned driver:

Another important thing to consider once we are done loading our unsigned driver is reverting the previously patched function to avoid any issues with PatchGuard. Again, this is as simple as just reverting our code change:

Now that we have seen all of the moving parts, let’s consider another scenario: What if we want to disable DSE using a vulnerable driver rather than malicious driver signed with a leaked certificate? Well as we’ve seen above, all that we require are read/write primitives in a vulnerable driver, and there are no shortage of those!

Let’s use the a vulnerable driver to disable DSE. In this case we’ll use Intel’s iqvw64e.sys driver which has been quite popular for a while. As we aren’t executing code in the kernel this time, we’re going to have to do a few additional steps to calculate our addresses in user-mode.

Next, we need to complete our signature search. The simplest way here is just to memory map our files as SEC_IMAGE and hunt through the PE sections in memory:

With that done we need to read out the base PTE address:

Next we need to read our the PTE entry for MiGetPteAddress so we can modify this:

We update the write bit of the page:

Finally, we copy our memory patch:

With all that done, we find that we can again load unsigned drivers due to DSE being disabled:

Once loaded, it is important that you revert your changes to avoid PatchGuard from BSOD’ing your instance.

So how do we go about protecting against something like this? Thankfully for defenders there are a couple of options. First is HVCI!

HVCI uses Second Level Address Tables (SLAT) to ensures that pages mapped as Read-Execute cannot be made writable, as well as ensuring that Read-Write pages cannot have the Execute bit set in the PTE. As you can imagine, this makes doing things like above very difficult, as we are no longer in a position to just patch executable memory.

For example let’s try and re-run the above scenario with HVCI enabled: 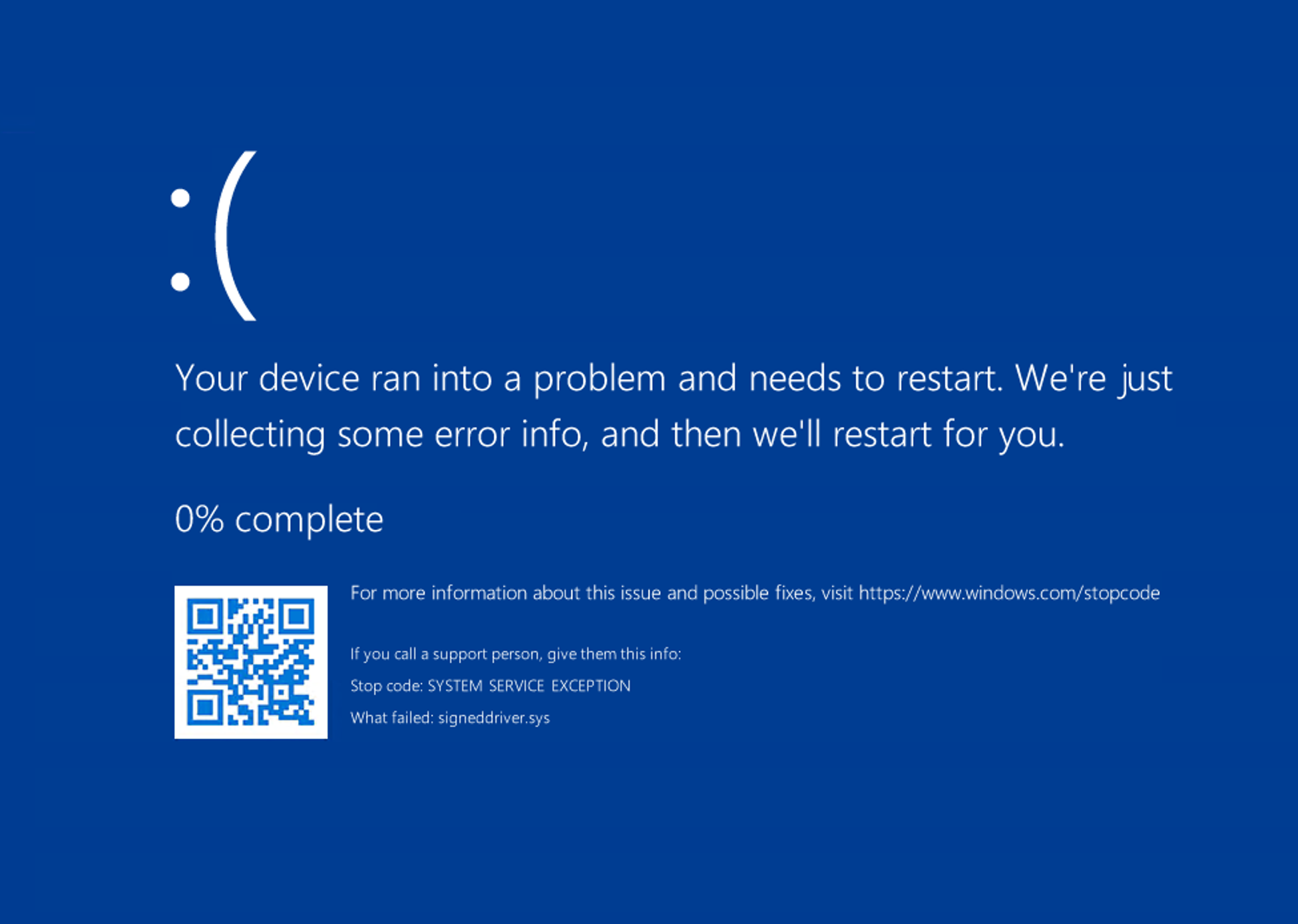 If we pull the memory dump and throw this into WinDBG, we can see that even though we tried to update the protection on the memory page, our memcpy still caused a SYSTEM SERVICE EXCEPTION:

If HVCI can’t be enabled, next up is Microsoft’s Attack Surface Reduction, which blocks a list of commonly exploited vulnerable drivers and leaked code signing certificates. This again prevents the foothold required by attackers to jump into the kernel, however with the number of driver vulnerabilities out there, is a much less effective control.