As many testers will know, achieving C2 communication can sometimes be a pain. Whether because of egress firewall rules or process restrictions, the simple days of reverse shells and reverse HTTP C2 channels are quickly coming to an end.

OK, maybe I exaggerated that a bit, but it's certainly becoming harder. So, I wanted to look at some alternate routes to achieve C2 communication and with this, I came across Cobalt Strike’s ExternalC2 framework.

ExternalC2 is a specification/framework introduced by Cobalt Strike, which allows hackers to extend the default HTTP(S)/DNS/SMB C2 communication channels offered. The full specification can be downloaded here.

Essentially this works by allowing the user to develop a number of components:

Using the diagram from CS's documentation, we can see just how this all fits together: 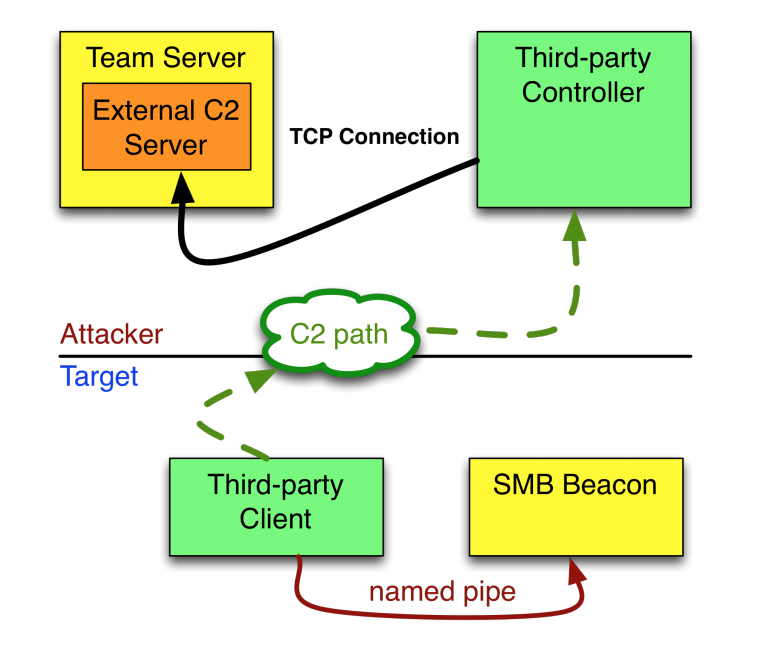 Now, before we roll up our sleeves, we need to understand how to communicate with the Team Server ExternalC2 interface.

First, we need to tell Cobalt Strike to start ExternalC2. This is done with an aggressor script calling the externalc2_start function, and passing a port. Once the ExternalC2 service is up and running, we need to communicate using a custom protocol.

The protocol is actually pretty straight forward, consisting of a 4 byte little-endian length field, and a blob of data, for example:

To begin communication, our Third-Party Controller opens a connection to TeamServer and sends a number of options:

For this example, we will be using Python on the server side for our Third-Party Controller, and C for our client side Third-Party Client.

First, we need our aggressor script to tell Cobalt Strike to enable ExternalC2:

Now that ExternalC2 is up and running, we can create our Third-Party Controller.

Let’s first establish our connection to the TeamServer ExternalC2 interface:

Once established, we need to send over our options. We will create a few quick helper function to allow us to prefix our 4 byte length without manually crafting it each time:

Now we can use these helper functions to send over our options:

Now that Cobalt Strike knows we want an x86 SMB Beacon, we need to receive data. Again let’s create a few helper functions to handle the decoding of packets rather than manually decoding each time:

This allows us to receive raw data with:

Our finished example can be found here.

Now we have a working controller, we need to create our Third-Party Client. To make things a bit easier, we will use win32 and C for this, giving us access to Windows native API. Let’s start with a few helper functions. First, we need to connect to the Third-Party Controller. Here we will simply use WinSock2 to establish a TCP connection to the controller:

Next, we need a way to receive data. This is similar to what we saw in our Python code, with our length prefix being used as an indicator as to how many data bytes we are receiving:

Similar, we need a way to return data over our C2 channel to the Controller:

Now we have the ability to communicate with our Controller, the first thing we want to do is to receive the beacon payload. This will be a raw x86 or x64 payload (depending on the options passed by the Third-Party Controller to Cobalt Strike), and is expected to be copied into memory before being executed. For example, let’s grab the beacon payload:

And then for the purposes of this demo, we will use the Win32 VirtualAlloc function to allocate an executable range of memory, and CreateThread to execute the code:

Once the SMB Beacon is up and running, we need to connect to its named pipe. To do this, we will just repeatedly attempt to connect to our \\.\pipe\xpntest pipe (remember, this pipename was passed as an option earlier on, and will be used by the SMB Beacon to receive commands):

And then, once we have a connection, we can continue with our send/recv loop:

And that’s it, we have the basics of our ExternalC2 service set up. The full code for the Third-Party Client can be found here.

Now, onto something a bit more interesting.

Let’s recap on what it is we control when attempting to create a custom C2 protocol:

From here, we can see that the data transfer between the Third-Party Controller and Third-Party Client is where we get to have some fun. Taking our previous "Hello World" example, let’s attempt to port this into something a bit more interesting, transferring data over a file read/write.

Why would we want to do this? Well, let’s say we are in a Windows domain environment and compromise a machine with very limited outbound access. One thing that is permitted however is access to a file share... see where I’m going with this :) By writing C2 data from a machine with access to our C2 server into a file on the share, and reading the data from the firewall’d machine, we have a way to run our Cobalt Strike beacon.

Let’s think about just how this will look:

Here we have actually introduced an additional element, which essentially tunnels data into and out of the file, and communicates with the Third Party Controller.

What we will do however, is split our previous Third-Party Client into 2 parts. One which is responsible for running on the "Internet Connected Host", receiving data from the Third-Party Controller and writing this into a file. The second, which runs from the "Restricted Host", reads data from the file, spawns the SMB Beacon, and passes data to this beacon.

I won't go over the elements we covered above, but I'll show one way the file transfer can be achieved.

First, we need to create the file we will be communicating over. For this we will just use CreateFileA, however we must ensure that the FILE_SHARE_READ and FILE_SHARE_WRITE options are provided. This will allow both sides of the Third-Party Client to read and write to the file simultaneously:

Next, we need a way to serialising our C2 data into the file, as well as indicating which of the 2 clients should be processing data at any time.

To do this, a simple header can be used, for example:

The idea is that we simply poll on the id field, which acts as a signal to each Third-Party Client of who should be reading and who writing data.

Putting together our file read and write helpers, we have something that looks like this:

Here we see that we are adding our header to the file, and read/writing C2 data into the file respectively.

And that is pretty much all there is to it. All that is left to do is implement our recv/write/read/send loop and we have C2 operating across a file transfer.

The full code for the above Third-Party Controller can be found here. Let's see this in action:

If you are interested in learning more about ExternalC2, there are a number of useful resources which can be found over at the Cobalt Strike ExternalC2 help page, https://www.cobaltstrike.com/help-externalc2.