For many pentesters, Meterpreter’s getsystem command has become the default method of gaining SYSTEM account privileges, but have you ever have wondered just how this works behind the scenes?

In this post I will show the details of how this technique works, and explore a couple of methods which are not quite as popular, but may help evade detection on those tricky redteam engagements.

Most of you will have used the getsystem module in Meterpreter before. For those that haven’t, getsystem is a module offered by the Metasploit-Framework which allows an administrative account to escalate to the local SYSTEM account, usually from local Administrator.

Of these, the ImpersonateNamedPipeClient API call is key to the getsystem module’s functionality, and takes credit for how it achieves its privilege escalation. This API call allows a process to impersonate the access token of another process which connects to a named pipe and performs a write of data to that pipe (that last requirement is important ;). For example, if a process belonging to “victim” connects and writes to a named pipe belonging to “attacker”, the attacker can call ImpersonateNamedPipeClient to retrieve an impersonation token belonging to “victim”, and therefore impersonate this user. Obviously, this opens up a huge security hole, and for this reason a process must hold the SeImpersonatePrivilege privilege.

This privilege is by default only available to a number of high privileged users: 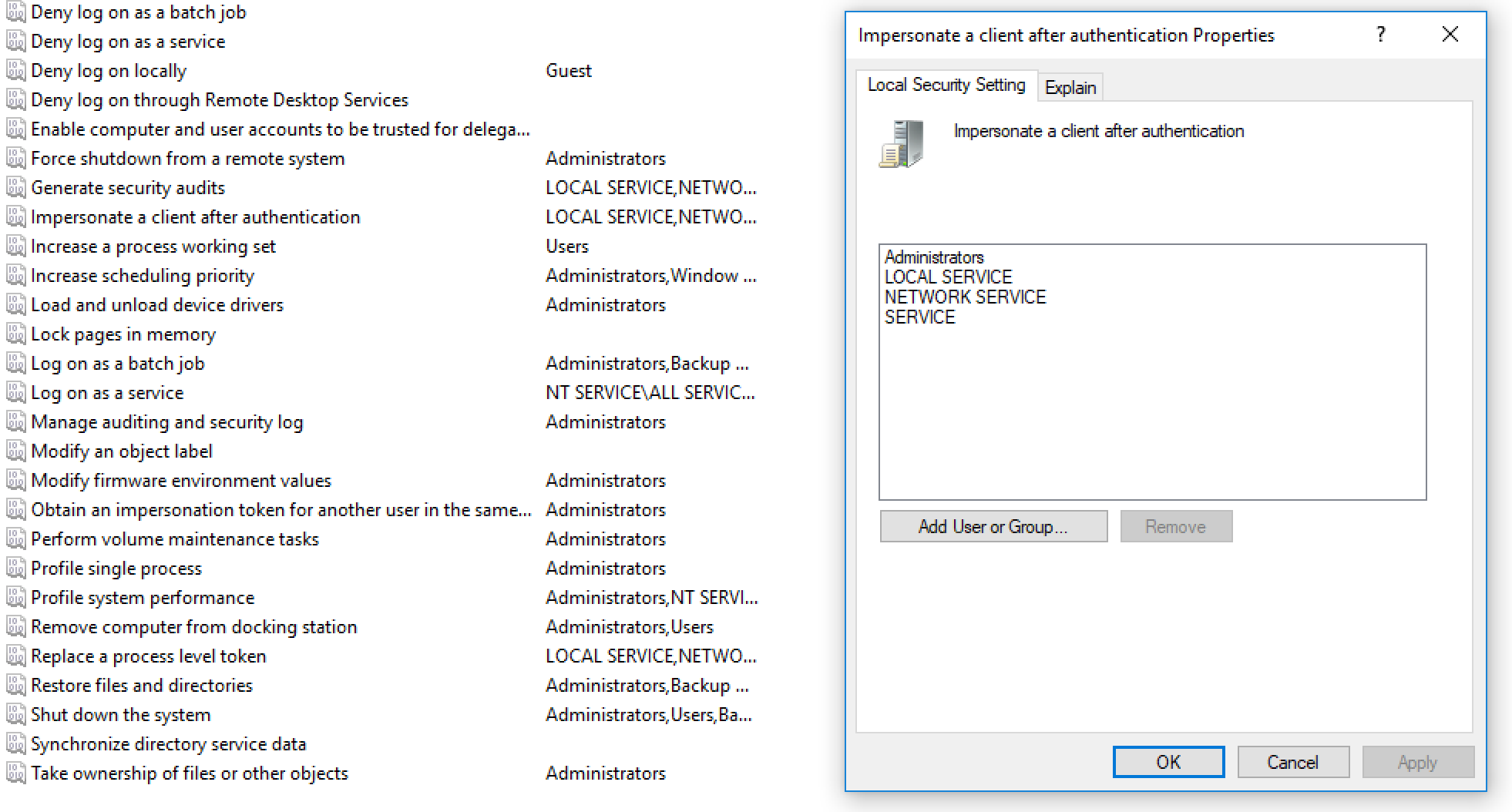 This does however mean that a local Administrator account can use ImpersonateNamedPipeClient, which is exactly how getsystem works:

All that is left to do is to spawn cmd.exe with the newly gathered SYSTEM impersonation token, and we have a SYSTEM privileged process.

To show how this can be achieved outside of the Meterpreter-Framework, I’ve previously released a simple tool which will spawn a SYSTEM shell when executed. This tool follows the same steps as above, and can be found on my github account here.

To see how this works when executed, a demo can be found below:

Now that we have an idea just how getsystem works, let’s look at a few alternative methods which can allow you to grab SYSTEM.

For anyone unlucky enough to follow me on Twitter, you may have seen my recent tweet about using a .MSI package to spawn a SYSTEM process:

There is something nice about embedding a Powershell one-liner in a .MSI, nice alternative way to execute as SYSTEM :) pic.twitter.com/cXAK6ntpcJ
— Adam (@xpn) November 6, 2017

This came about after a bit of research into the DOQU 2.0 malware I was doing, in which this APT actor was delivering malware packaged within a MSI file.

It turns out that a benefit of launching your code via an MSI are the SYSTEM privileges that you gain during the install process. To understand how this works, we need to look at WIX Toolset, which is an open source project used to create MSI files from XML build scripts.

The WIX Framework is made up of several tools, but the two that we will focus on are:

Reviewing the documentation for WIX, we see that custom actions are provided, which give the developer a way to launch scripts and processes during the install process. Within the CustomAction documentation, we see something interesting:

This documents a simple way in which a MSI can be used to launch processes as SYSTEM, by providing a custom action with an Impersonate attribute set to false.

When crafted, our WIX file will look like this:

A lot of this is just boilerplate to generate a MSI, however the parts to note are our custom actions:

This custom action is responsible for executing our provided cmdline as SYSTEM (note the Property tag, which is a nice way to get around the length limitation of the ExeCommand attribute for long Powershell commands).

Another trick which is useful is to ensure that the install fails after our command is executed, which will stop the installer from adding a new entry to “Add or Remove Programs” which is shown here by executing invalid VBScript:

Finally, we have our InstallExecuteSequence tag, which is responsible for executing our custom actions in order:

To compile this into a MSI we save the above contents as a file called “msigen.wix”, and use the following commands:

Finally, execute the MSI file to execute our payload as SYSTEM:

This method of becoming SYSTEM was actually revealed to me via a post from James Forshaw’s walkthrough of how to become “Trusted Installer”.

Again, if you listen to my ramblings on Twitter, I recently mentioned this technique a few weeks back:

How this technique works is by leveraging the CreateProcess Win32 API call, and using its support for assigning the parent of a newly spawned process via the PROC_THREAD_ATTRIBUTE_PARENT_PROCESS attribute.

If we review the documentation of this setting, we see the following:

We can create a new process and set the parent with the following code:

When compiled, we see that we can launch a process and inherit an access token from a parent process running as SYSTEM such as lsass.exe:

The source for this technique can be found here.

Bonus Round: Getting SYSTEM via the Kernel

OK, so this technique is just a bit of fun, and not something that you are likely to come across in an engagement… but it goes some way to show just how Windows is actually managing process tokens.

For this analysis, we will be using WinDBG on a Windows 7 x64 virtual machine in which we will be looking to elevate the privileges of our cmd.exe process to SYSTEM by manipulating kernel structures. (I won’t go through how to set up the Kernel debugger connection as this is covered in multiple places for multiple hypervisors.)

Once you have WinDBG connected, we first need to gather information on our running process which we want to elevate to SYSTEM. This can be done using the !process command:

Returned we can see some important information about our process, such as the number of open handles, and the process environment block address:

For our purpose, we are interested in the provided PROCESS address (in this example fffffa8002edd580), which is actually a pointer to an EPROCESS structure. The EPROCESS structure (documented by Microsoft here) holds important information about a process, such as the process ID and references to the process threads.

Amongst the many fields in this structure is a pointer to the process’s access token, defined in a TOKEN structure. To view the contents of the token, we first must calculate the TOKEN address. On Windows 7 x64, the process TOKEN is located at offset 0x208, which differs throughout each version (and potentially service pack) of Windows. We can retrieve the pointer with the following command:

This returns the token address as follows:

As the token address is referenced within a EX_FAST_REF structure, we must AND the value to gain the true pointer address:

Which means that our true TOKEN address for cmd.exe is at fffff8a000d76c50. Next we can dump out the TOKEN structure members for our process using the following command:

This gives us an idea of the information held by the process token:

So how do we escalate our process to gain SYSTEM access? Well we just steal the token from another SYSTEM privileged process, such as lsass.exe, and splice this into our cmd.exe EPROCESS using the following:

To see what this looks like when run against a live system, I’ll leave you with a quick demo showing cmd.exe being elevated from a low level user, to SYSTEM privileges: